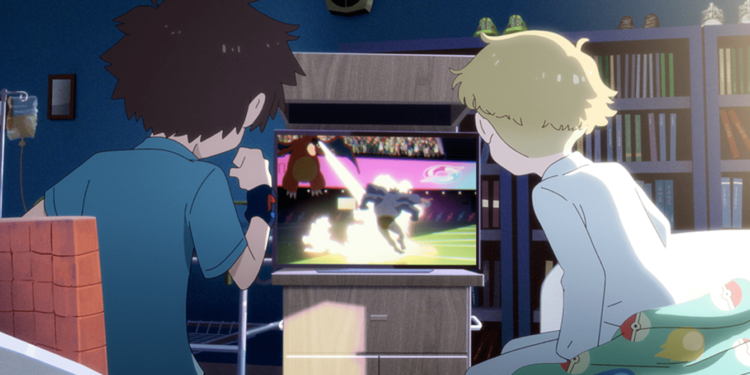 We asked the director, Shingo Yamashita and assistant director, Yo Watanabe, about their thoughts on the film and its production.

―Please tell us what exactly you do in animation production.

Yamashita:
The job of a director is to set the guidelines for the work. To put it simply, my job is to tell how I want the work to look like, and then to check whether it’s done in accordance with those guidelines. If I’m giving directions well, and the good stuff comes up, I have nothing to do, so if I’m not working, I’m so good that I’m not working. I’m always busy, so I guess you could say I’m still young and inexperienced (laughs).

Watanabe:
My job as an assistant director is a bit difficult to explain. It often changes depending on the nature of the work or the director’s style. I share the work process and give instructions to each section, and so on. Actually, Mr. Yamashita-san is a man who can do everything in multiple ways, so I feel like I’m learning a lot from him.

―I’ve heard that you are particularly particular about your art.

Yamashita:
That’s true. Because I come from an animator’s background, I’m inclined to be very particular about the drawings, even at the stage of keyframe check.

―What do you mean by “keyframe check”?

Yamashita:
In the current mainstream Japanese animation process, there is a process called layout and rough drafting, which determines the basic structure of the screen and the general movement and placement of the characters. The animation director then modifies the picture and sends it back to the animators, and the result is the keyframe (also called the second keyframe). The director and animation director check it once more before sending it to the animation, and then the actual colors are added. There’s basically no going back after the animation, so it’s quite a last-ditch process. Normally, however, at the director’s level, all I do is check for mistakes and let it flow. But, I still have a lot of ideas, so I have to add some material and do some more work (laughs).

―Did you do the same thing in episodes 1-6 so far?

Yamashita:
Basically, I only directed the part I directed. For this series, I had four other directors take charge of the work, and they were responsible for the number of episodes. For the episodes that I wasn’t in charge of directing, I left them to their own devices and let them bring out their own colors. On the other hand, I directed episodes 1, 4, and 7 myself, so I did what I always do until the end, making all sorts of adjustments.

―From the comments on YouTube and other sites, it seems like that kind of attention to detail is reaching your fans as well.

Yamashita:
I don’t think it’s good to be too particular about things (laughs). In episode 5, the assistant director, Mr. Watanabe’s colors really come through. A lot of people said that the pictures were good, as well as his colors as an artist.

―Let me ask you about Twilight Wings. It’s developed in an omnibus format, but if you have a theme or concept in mind, could you tell us about it?

Yamashita:
Basically, the concept is to foreshadow Tommy and John, the two boys in the hospital, while introducing the attractive gym leaders one by one. I wanted to change the direction of the production for each episode, so in episodes 1 to 6, I think each one was directed in a different way.

For example, in episode 5, Olive’s(Oleana) emotional movements aren’t as clear as they were in the previous episodes. Olive is a character with a complex backbone, so it was very difficult for me to create an emotional story in a way that was easy to understand. I wanted to avoid showing the specifics of the setting, but I wanted to make sure that there would be a point that fans would find moving when they saw it. The assistant director, Mr. Watanabe, did a wonderful job of realizing that, and I think it was a great success (laughs). 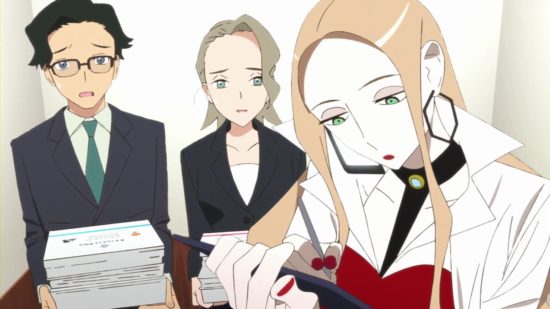 In addition, the story of Hop and Wooloo in episode 3 was something I don’t usually do, or perhaps I deliberately made it more comical and closer to the traditional direction of the TV anime “Pocket Monsters”.

That’s because I thought that that kind of cheerfulness and pastoral atmosphere was the perfect way to express the character of Hop, and I thought it would be great to expand the worldview by including that kind of story in all the episodes. Even if there are glimpses of seriousness and cruelty, there’s still a warm place in there.

My aim was to highlight the situation of John and Tommy, who are too sick to participate in Pokémon battles and can’t imagine their future, through the existence of Episode 3. I tried to symbolize their personalities and values in the way they look at things and in the way they are drawn and cut.

Hop also has a hard upbringing, depending on how you look at it, as his brother is a champion, but he has a solid goal of growing into a strong trainer and becoming a champion.

Even the scene at the beginning of episode 3, where he’s watching TV as in episode 1, shows the brightness of the background music, the sunlight and the overall brightness of the room. I made that kind of contrast between episodes 1 and 3 with that in mind. 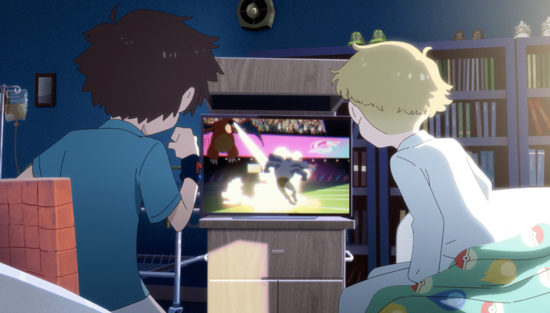 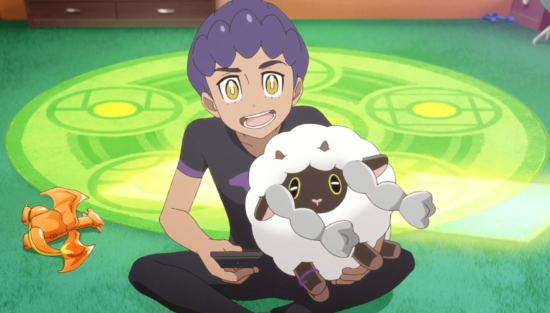 ―When you look at the story as a whole, you were conscious of the way in which each of the episode are connected in some way, weren’t you?

Yamashita:
Yes, that’s right. The elements that you can’t see simply by watching each episode are the unique appeal of the series, and I wanted to include them throughout the series.

―While the focus of the character changes each episode, Corviknight’s taxi has been in every episode. Is this another place where they are meant to make a connection throughout the series?

Yamashita:
In the beginning, we were told at the planning stage that we wanted to include Corviknight’s Sora-tobu Taxi (Flying Taxi) as a link between the world of Galar, so we started out with that as the main plot point. In addition to that, we decided on a format where the taxi driver would ask questions(“Where are you going?”, “What are you doing here?”) to the characters when we were discussing the scenario. 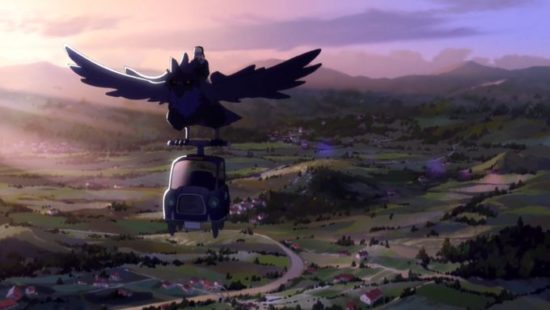 ―”Twilight Wings” is based on the Nintendo Switch game “Pokémon Sword and Pokémon Shield”. Was there anything you were careful about or particular about when creating the anime?

Yamashita:
Speaking of particulars, we didn’t want to disappoint the fans of the original game, so we were very careful to keep that in mind. However, not everything can be recreated, so it was difficult and interesting to maintain a balance between what we wanted to do in terms of the scenario and direction while also preserving the world of the original work.

―John and Tommy, the original characters in this film, are very appealing. Were there any points that were important to you in drawing them?

Yamashita:
If anything, I’m the type of person who is disappointed when original characters are introduced in an anime adaptation of an existing work. I think it’s definitely difficult for viewers to accept the sudden appearance of characters that don’t appear in the original work.

In addition, “Twilight Wings” is a very short film, only five minutes long, so I didn’t think it would be possible to convey everything about John and Tommy, including their personalities and relationships. So as a trick, we often have an answer to one episode in episode 6, or an answer to episode 6 in episode 7.

―Please tell me about the highlights of the final episode.

Yamashita:
I think one of the charms of the TV anime Pokémon is the powerful Pokémon battles, but “Twilight Wings” starts off with Pokémon battles as a lesser subject.

John wants to see the battles in person, and he’s interested in seeing them in person, but it’s not happening. In episode 7, John will actually go to the stadium to watch the battle, and I think the highlight of the show will be that we’ll see an intense battle of perhaps unprecedented quality.

―Finally, do you have a message for “Twilight Wings” fans and Pokémon fans? 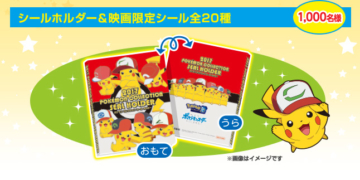