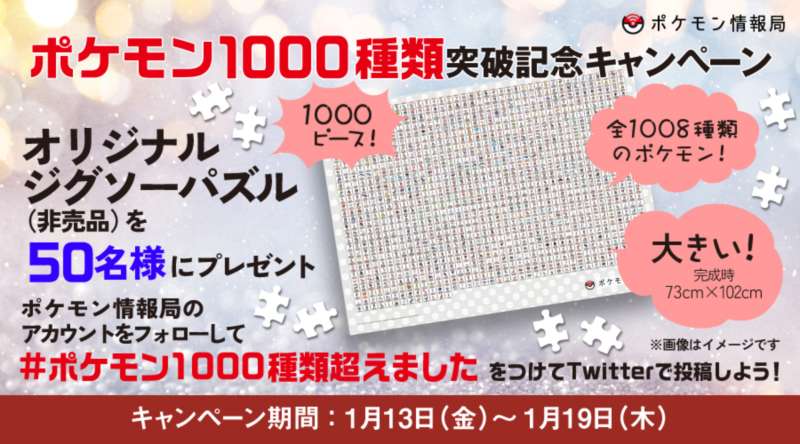 To commemorate the fact that the number of Pokémon discovered so far has exceeded 1,000, a giveaway campaign is being held on the Twitter account “Pokémon Information Bureau”!
Original jigsaw puzzle (1000 large pieces) with all 1008 kinds of Pokémon will be given away by drawing among those who participate in the campaign!
The campaign will run from 14:00 on January 13 (Fri.) to 23:59 on January 19 (Thu.). Be sure to check out our Twitter feed!

■Here is how to participate in the campaign!
(1) Follow the Pokemon Information Bureau account (@poke_times) on Twitter!
(2) Tweet with the hashtag “#1000 Pokemon have been found!
(3) We’ll give away original jigsaw puzzles to 50 lucky winners drawn from among those who tweeted!
*People who have set their postings to private are not eligible for the drawing.
*Posts made outside of the campaign period will not be eligible for the drawing.
*Editing or deleting the designated hashtag may result in your entry not being accepted. Please do not edit or delete the designated hashtags.